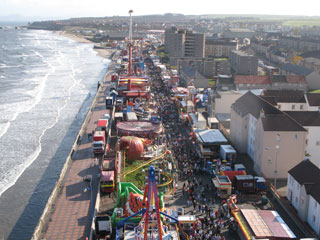 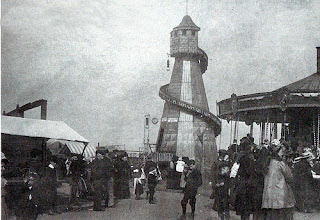 THE HISTORY....
The famous Kirkcaldy Links Market is officially noted as having started in 1304, and at that time it was a weekly market for farmers, traders and craftsmen etc. In 1305 Edward the first granted the burgh of Kirkcaldy the right to hold an annual fair at the Easter Octave, and this has grown to become the kirkcaldy Links Market as we know today, that runs for a week around Easter time - (2012 dates to be announced)


Although official records state that the Links Market began in 1304, it is likely that there was a weekly traders market held in the Kirkcaldy area before this. The act of granting a royal charter to hold a market or fair was actually a means of raising taxes, and throughout the 13th and 14th centuries many towns across the country were granted such charters by the King.


Many of the annual fairs attracted traveling traders and performers, such as acrobats, jugglers and musicians, who would move from town to town visiting the fairs. The popularity of traveling showmen increased throughout the centuries, becoming a ‘trade’ in itself. During the eighteenth century showmen and sideshows of all descriptions were commonplace including strolling players, freak shows, exhibitions of curiosities, performing animals, games of skill, etc. It was also during this time that simple fairground rides became popular, such as roundabouts that were propelled by ponies, and helter-skelters and chutes.


The late 1800’s was when the steam power was harnessed to create rides such as carousels that were the forerunners of today’s thrill-rides.Around the same time we also saw the first use of electrical lighting and mechanical musical organs.


Today the Links Market is dominated by exciting thrill-rides such as coasters, freefall towers, dodgems, rotors and tagadas, but there are still sideshow stalls, children’s rides and traditional helter-skelters and carousels.


As the first annual fair of the season in Kirkcaldy, Fife, Scotland, the Links Market is an important feature in the Showmen’s calendar, and benefits from having the first public viewing of any new rides.