Thunder in the Glens and a biker's world, with Joe 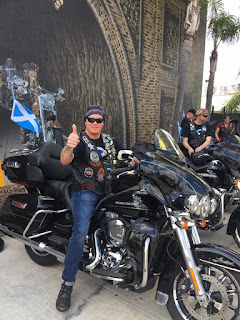 If there’s nothing like the smell of petrol and exhaust fumes for you, the roaring and rattling of engines pitches up your heart, and the open road expands your soul, you’re most probably a motorbike fan.

There are motorbikes, and then there is the Harley-Davison. This make has its own fan base and bikers from all over the world who ride Harley-Davison are proud to be members of the same “family”.


Thunder in the Glens is one major event in the UK for Harley-Davidson fans; it attracts people from all over Britain and the rest of the world who attend an impressive three day event in the middle of a beautiful, jaw dropping National Park.

To get a better perspective of what is it like to attend a gathering like this I have asked Joe, our Mechanic at A1 Coaches who is a biker himself.

Joe was brought up among bikes. As a matter of fact, he took his passion for bikes from his parents at a very early age: Joe’s mum loved to go on a ride with Joe’s dad when Joe was still in the womb. A “few years” later, Joe sports the rugged looks of a legendary biker and even his partner Dawn is a biker herself.

Joe- “With the kids grown up and settled, we’ve got a lot more time to spend touring on the bike” – says Joe. “I’m really lucky; my partner is also a biker! I find there are guys out there that don’t share their hobby with their partners. I’m lucky that my soul mate is also my comrade in adventures. When we are out on the bike we enjoy a sense of freedom, the exhilaration of the open road. Riding on a bike is a firsthand experience of the outdoors, very intense and invigorating, a completely different thing to being ‘caged up’ inside a car, as I see it”.

Q-“Why do you like Harley Davison instead of other motorbike makes?”

Joe-“Harley Davison got me hooked just by the way they sound. I am a mechanic, and the sound of certain engines is music to my ears. For example, the sound of a V8 engine is music to my ears. Of course, Japanese bikes can be very refined and well tuned, but there’s something about the Harley’s rumbling sound that really gets you. This “potato-potato” sound is like a song to me. And Harley Davison is also a lifestyle and a big family too”.

Q- Thunder in the Glens is a paramount event for a biker. Would you recommend it to those of us who are not bikers?

Joe- “Oh absolutely! It’s a big rally with something for everyone. If you are not a biker then you are in for a big parade of impressive motorbikes, all different, it’s a very colourful spectacle. And it doesn’t end there: plenty of things to do, during the day there’s also a family atmosphere, kids line up to see the bikes, although very small kids may cry with the thundering sound.
Many events are motor related like demo bike rides, Jeep demo drives, custom bike show and off road motorbike riding. On top of that there are lots of stands and outside entertainment, things like Scottish Knights battle scenes, live bands, you can even catch a vintage steam train at Aviemore.  Oh, Thunder in the Glens is a big rally that happens to be pivoting around The Queen of Bikes, the Harley Davison. There is a lot going on at Aviemore, I tell you”.

As a qualified specialist technician for the oil industry Joe has travelled to many countries and always found time to visit the local Harley Davison dealership collecting merchandise and memorabilia from local Chapters.


A chapter is a HOG (Harley Owners Group) sponsored by a Harley dealership. A membership to a chapter connects you with other Harley owners in your area, giving you the chance to gather and ride with other local Harley owners, and to be a part of the Harley-Davison rallies and events, which are many and very well organized all around the world.

A biker’s dream holiday in the USA


Joe travelled to the 76th Daytona Bike Week Anniversary, a big motorbike gathering, and had the chance to visit the city of Dunedin in Florida. Other members of the HOG Dunedin Chapter from Scotland were also there with Joe, and they proudly wore their kilts while strolling around Daytona Beach. As you see, belonging to a HOG Chapter goes a long way, and you will meet other members and make friends within this big family of Harley owners and other bikers no matter where in the world you go.

Thunder in the Glens is one major event in the UK for Harley-Davidson fans. People from all over the world attend to enjoy the event.

By far, the largest Harley-Davidson rally in the UK nowadays.

To have a glimpse of the atmosphere at Thunder in the Glens of the 2016 event:

2017 Thunder in the Glens expects to attract bikers and general public from all over Britain and beyond.

A great opportunity to enjoy the impressive surroundings of Aviemore in the Cairngorms National Park, Thunder in the Glens three day rally is a remarkable addition to the Scottish festival scene this summer.

A1 Coaches facilitates transport to this three day rally. For enquiries just call 01592 713443 or e-mail info@a1coaches.com or visit www.a1coaches.com