Coach Hire Fife, Scotland Day tour to East Neuk, St Andrews & Falkland Palace
8th & 15th April 2011
East Neuk, St Andrews & Falkland Palace and Gardens- Trip around places of interest along East Neuk, Including St Monan’s Kirk, Pittemweem Harbour, Anstruther for a famous Fish Supper, Visit to the Ruins of St Andrews Cathedral, finishing off at Falkland Palace and Gardens.
The cost for this tour will be £9.50
Tour East Neuk of Fife and Falkland Palace with Coach Hire Scotland
The East Neuk, or corner, is one of the main attractions of Fife. It is a stretch of coastline dotted with a series of delightful fishing villages, each clustered around its harbour. The villages are a joy to discover with their wealth of vernacular architecture. The Old fishing village of Cellardyke is often referred to as East Anstruther.

We Will be visiting Anstruther, or Enster, as it is known by locals, gained its Royal Charter in 1587 and comprises Anstruther Easter and Anstruther Wester, Cellardyke and Kilrenny. In its heyday, Anstruther was one of the busiest ports in the East Neuk of fife and is steeped in history. Even with the general decline of the Fishing industry Anstruther is still a great attraction because of the Fife Coastal Path and the Anstruther Fisheries museum. The museum is housed in old domestic buildings and also in the 16th century site used by the monks from Balmerino Abbey.

We will also be visiting St Andrews - Overlooking the foreshore, the ruins once formed part of the palace and stronghold of the Bishops and Archbishops of St Andrews. The castle, founded c 1200. suffered greatly during the Wars of Independence. Bishop Henry Wardlaw, founder of the university, was tutor to James I and it is possible that his young charge spent time here prior to his captivity in England. Bishop Kennedy taught James II how to break the power of his nobles by comparing them to a bundle of arrows, with the suggestion he snap each one individually.Many reformers suffered imprisonment here, including George Wishart whom Cardinal Beaton had burnt at the stake in front of his palace, and Patrick Hamilton another martyr. Following the martyrdom of Wishart, a group of Protestants seeking revenge gained admission to the castle disguised as stonemasons and murdered Cardinal Beaton They held the castle for a year and were joined at intervals by others such as John Knox, and the siege was only lifted when the garrison capitulated to the French fleet. The besieged were taken to France and Knox was sent to the galleys.The late-16th Century entrance range with the central Fore Tower, originally flanked by two round towers, was the work of Archbishop Hamilton and it was supposedly from this facade (the exact spot is contested) that the body of Cardinal Beaton was displayed to the crowd. The buildings were arranged around a courtyard. In what remains of the northwest or Sea Tower is the grim Bottle Dungeon of late 14th Century construction; 24ft deep it is hewn out of solid rock. The other interesting items are a mine and counter mine excavated during the 1546-47 siege.In the pavement in front of the castle are the initials of George Wishart marking the spot where he was burnt at the stake in 1546. 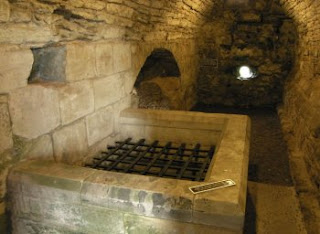 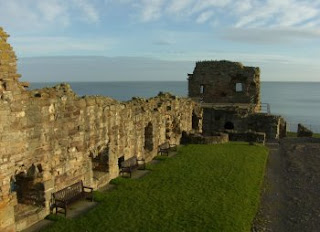 ﻿We will also be visiting Falkland Palace, The domain of Falkland Palce belonged originally to the Crown and was gifted by Malcolm IV to Duncan, sixth Earl of Fife, who married Ada, the king's niece. It remained in this family until 1371, when Isabel, last countess of the line, transferred the estates to Robert Stuart, Earl of Menteith, second son of Robert II, who became sixteenth Earl of Fife, and was afterwards created Duke of Albany. This nobleman was for thirty-four years Regent of Scotland, and resided in the Castle of Falkland. Of this building no trace now remains. In his days the castle received its first historic notoriety, from the tragic fate of David, Duke of Rothesay, eldest son of Robert III.

The Duke of Albany early perceived the brilliant promise of the young heir to the throne, and feared lest he should menace his power. Playing on the credulity of the imbecile king, he persuaded him to issue an order for the arrest and confinement of the prince, representing that this was necessary to teach him self-restraint. He was inveigled to the castle of Falkland, and imprisoned to die of starvation. His life was prolonged for some time by the compassion of the daughter of the governor, who fed him with small cakes through a crevice of the wall. When she was discovered and murdered by her own father for her merciful kindness, her task was taken up by another tender-hearted woman, a wet-nurse in the governor's family, who supplied the prince with milk from her breasts by means of a long reed, until she too was discovered and put to death.

When James I returned from captivity in 1424, Murdoch, son and successor m the Regency of Robert, was executed for treason, and Falkland was forfeited to the Crown. As the estate is well situated in a pleasant valley, at a convenient distance from Edinburgh and Stirling, and was surrounded by forests filled with game, it became a favourite resort of the Stuart kings. The palace was begun by either James III or James IV, and completed by James V. This latter monarch was particularly attached to Falkland, and died of grief here after the rout of Solway Moss. Mary of Guise often lived here, and it was a favourite resort of her daughter, Mary Stuart. Between 1561 and 1566 the latter visited it many times, and found much pleasure here in hunting and other outdoor sports. James VI was also partial to living here, and two attempts on his person, one of them the famous Gowrie conspiracy, were made here. The last monarchs here were Charles I and Charles II, both of whom made short visits. Its last visitor of fame was Rob Roy Macgregor, who took possession and plundered it after the battle of Sheriffmuir in 1715. All that is now left of the original quadrangle is the south side, and a ruinous wall on the east.

For more information on our trips please call us on 01592 713443 or email a1colleen@gmail.com
A1 Minibus & Coach Services LTD
577 Wellesley Road
Methil
Fife
Scotland
KY8 3PD
http://www.a1coaches.com/
Have a nice day the A1 Way!
Posted by Colleen Goodsir at 07:06